One of the basic gardening chores that a garden or allotment owner must perform from time to time is pruning trees and shrubs. Most species of trees and shrubs require regular pruning for good growth, flowering, or fruiting. Each plant species requires a suitable time of pruning (see tree and shrub pruning calendar). The weather is also important – if pruning is done in spring or autumn, choose a dry, sunny, and warm day, and in summer do not carry out such procedures during hot weather. 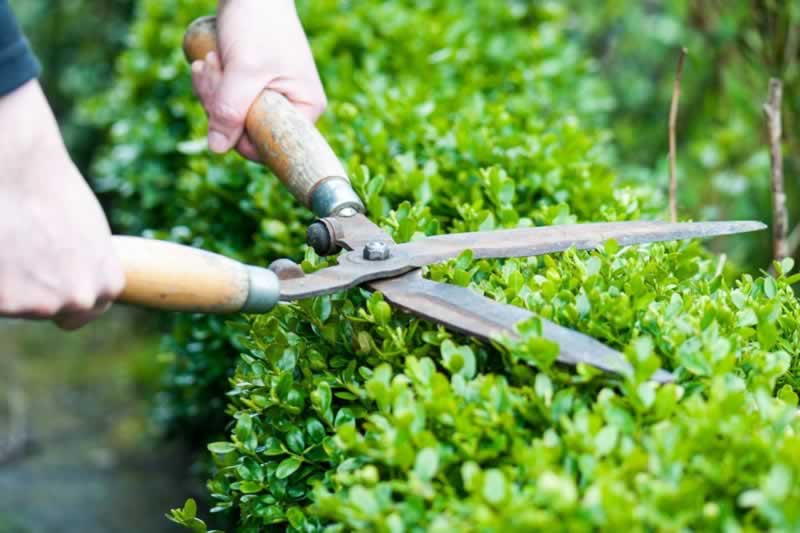 The basic tool is a secateurs – ordinary or with extended arms. In addition, the equipment should include saws and various types of knives. Tools used for cutting should be well-sharpened, cleaned, and disinfected. Denatured alcohol can be used for disinfection. Larger cutting wounds should be treated with a wound lubricant (Funaben 3, Santar SM, Tervanol, Lac Balsam, or emulsion paint with a 2% addition of Funaben 4, Fundazol, Topsin, or Copper 50). These agents facilitate the healing of wounds resulting from excision and contain bactericidal and fungicidal components.

How pruning should be carried out:

Thin branches are always pruned above the bud – the outer one if the branch grows vertically (the bud is to be directed from the trunk outward in order for the plant to grow outward) or above the top bud if we are dealing with a branch growing horizontally. A pruning shear is used as a tool. Thicker branches are cut with a saw. Place of cutting – right at the thickening at the root (for the so-called ring) or leaving a few centimeter pieces (for the so-called pivot or stump). Stump cutting is recommended for cherry, sweet cherry, plum, or apple trees. Cut wounds should be leveled and cleaned with a sharp knife and then protected with a suitable agent.

Pruning of cuttings – is carried out when you need to plant a plant with bare roots. The roots should be cut smoothly and the aboveground part should be pruned so that the balance between the roots and shoots of the plant is maintained.

Formative pruning – is carried out on young fruit trees. Its purpose is to create a strong trunk and a well-lit, strong crown, capable of supporting the weight of the fruit. Such pruning is carried out in early spring.

Clear-cutting pruning – removes diseased, dry, and broken shoots or those growing to the center of the bush.

Rejuvenation pruning – is used for older plants and is intended to improve the appearance of the plant and stimulate flowering. Some of the old shoots are cut out and a new plant habit is created from the most prolific young shoots. It is sometimes worth entrusting an experienced gardener to perform this procedure.

When it comes to pruning, this is a group of plants that are pruned occasionally (except yew). Most coniferous shrubs require (and tolerate) only minor treatments of this type. Primarily, withered, broken, diseased, or frosted branches are pruned. More pruning is done only to those plants to which we intentionally want to give some shape. Evergreen deciduous shrubs need pruning only in case of serious damage. Rhododendron shrubs can be rejuvenated by pruning single shoots (in early April).

This is already a slightly more difficult art, but it is worth cutting shrubs because pruned plants bloom more abundantly and have a better habit. Ornamental shrubs shedding leaves are divided into two groups:

Early flowering shrubs – such as forsythia, quince, cherry, or snapdragon form flower buds in autumn, so they are pruned after they finish flowering, in spring, shortening the long shoots from 1/2 to 1/4 of their length. Pruning these shrubs before flowering could result in the plant not blooming at all! Alternatively, you can thin the shrub.

Willow iva – to maintain a nice plant habit, it should be pruned regularly. Perform pruning immediately after flowering (late April, early May), shortening the shoots to 1/4 length. If you are pruning the grafted form then shorten the shoots to 1/3 of their length.

Forsythia requires annual pruning after flowering (May). Cut off 2/3 of the length of flowering shoots. If not pruned, forsythia shaves off the bottom and blooms less well.

Shrubs and trees of almond should be pruned quite rarely – every 3-4 years and not too hard because the flowers bloom along the entire length of the shoot.

In grafted plants, you also need to carefully cut the shoots growing from the rootstock (usually straight and thin), which disfigure and weaken the plant.

Pruning of lilac (un) shrubs should be carried out immediately after flowering; the set seeds weaken and disfigure the plant. Root suckers of lilac should be systematically cut to not weaken the plant.

Tamarisks are pruned after flowering (June). Every few years a strong rejuvenation pruning is advisable – the plant will bloom more abundantly and have a better habit. Frozen tamarisk shrubs should be pruned near the ground in March; they will sprout new shoots after this procedure.

Wonder bush does not require regular pruning, but it is good to trim the bush a little every 2-3 years. Pruning is carried out after flowering.

Shrubs that bloom in summer and autumn – such as hydrangea, pentacle, or buddleia – bloom during this year’s growth. They are pruned in early spring when the risk of hard frosts has passed.

Cutting roses – admittedly, roses are also shrubs, but their cutting requires a separate discussion. Cutting roses is a slightly more complicated procedure than for other shrubs, primarily because different types of roses are cut differently. In early spring, damaged and disease-infested shoots are cut after mounding. Main pruning is carried out in April in the period after the last frost but before the formation of new shoots. Regular pruning is required for large-flowered roses – their flowering depends on it. The procedure should be carried out annually, immediately after uncovering the bushes. Remove weak or damaged shoots by cutting them with secateurs at the base. The remaining shoots are shortened by slightly less than half. Follow the rule that the stronger the shrub grows, the less we cut the shoots. On stronger-growing shrubs, we cut from 6 to meshes, and on weaker-growing shrubs from 2 to 4 meshes. The place of cutting should be no more than half a cm above the mesh facing outside the crown. Cut slightly diagonally. Cutting affects the size and number of flowers and the time of flowering. Roses with severely shortened stems bloom later but their flowers are larger and set on strong, long stems. Flowers of less shortened rose bushes will bloom earlier. The bushes will have more flowers but they will be finer and the stems will be weaker and shorter.

When cutting multiflora roses (bedding roses) on each shoot leave the same number of eyes, that is, from 2 to 6. Weak shoots do not cut.

Cutting bush roses is not necessary, but from time to time you can cut too dense or old shoots near the ground and shape the bush a bit. The same is done with climbing roses, park roses, and wild roses.

Cover roses do not require regular pruning – only old and feral shoots are removed. In late autumn, only diseased shoots are pruned and the longest branches are slightly undercut.

American milin – frosted and dry shoots are removed. It is also necessary to shorten last year’s shoots, on which there were flowers. These procedures should be carried out in early spring. Cutting the plant causes more abundant flowering.

Currants and gooseberries are pruned in early spring by cutting out older shoots in their entirety and leaving young and strong ones. Raspberries and blackberries are pruned after the harvest removing entirely the shoots that have borne fruit and the weak and diseased ones. 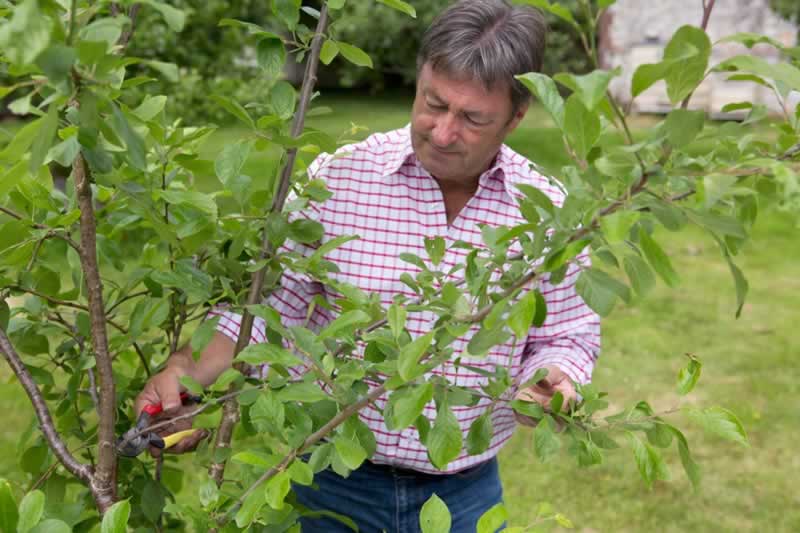 February, March – formative pruning of young trees (see above). As for larger, formed trees, pruning consists of removing diseased or broken branches and branches that shade each other or shade ripening fruit.

The so-called pome species, i.e. pear or apple trees, are cut in spring and sometimes even in late January or early February.

Stone species, such as cherries, are cut in August after the harvest. Peaches bear fruit on two-year-old shoots, and therefore all branches from which the fruit has been harvested should be cut in half.

Pruning of fruit trees after planting

All newly planted fruit trees should be pruned. This applies to trees planted in both spring and autumn. The tops of the youngest shoots sometimes fail to lignify and freeze during the winter. During spring pruning, check if the wood is not browned. If it is, cut the shoot all the way to healthy, bright tissue. If the tree has a lot of lateral shoots, then you only need to shorten them slightly. We cut the guide about 20-30 cm above the highest branching.

MARCH – cut currant and gooseberry bushes. The oldest shoots should be cut out completely, leaving strong and healthy young shoots of the plant. The rest of the young shoots are also better removed. Formative pruning of young fruit trees is carried out in early spring. Main pruning of pear, apple, and quince trees.

JUNE – pruning of ornamental shrubs that shed their leaves for winters, such as lilac(lilac)lilac(lilac), and tamarisk. Also, trim the shoots of roses that repeat flowering (2 eyes below the inflorescence) to stimulate the plant to bloom again.

AUGUST – main pruning of stone trees and clearance pruning of apple trees (similar to July). In August, conifer hedges are pruned. August is the last month to cut conifers. Cut raspberries currants and gooseberries, and shorten side shoots of blackberries.

SEPTEMBER – you can still cut raspberries and blackberries. In late summer, you can also cut ornamental trees such as birches, chestnut maples, and elm trees. This is also the right time to trim walnuts.

OCTOBER – lightly trim the shoots of roses (see cutting roses), you can still possibly cut currants, raspberries gooseberries, and blackberries. And that’s the end of the calendar for cutting trees and shrubs.

NOVEMBER – You can still make the last maintenance cuts. At the end of November, trim the beautiful and popular vines – clematis (except for those that bloom in late April and early May).

DECEMBER – During the thaw, you can perform tree pruning and undercut wild offshoots of fruit trees: apple, pear, and plum trees.

Trees and shrubs that are suitable for cutting into fancy and geometric shapes:

Which trees and shrubs should not be cut at all:

Do not cut conifers that form an even trunk, such as spruce or fir. Most conifers have a nice habit and intervention can only disfigure the plant and cause it to grow sideways. You also don’t cut rhododendrons and garden azaleas, narrow-leaf kalmia, magnolias, witch hazels, wolfsbane, Podolia wigwams, and acetate sumac. Damaged shoots are pruned as a last resort – this should be done in early spring – in March. The common mahonia does not require pruning, although it is often used for bouquets, but also cutting does not bother it.